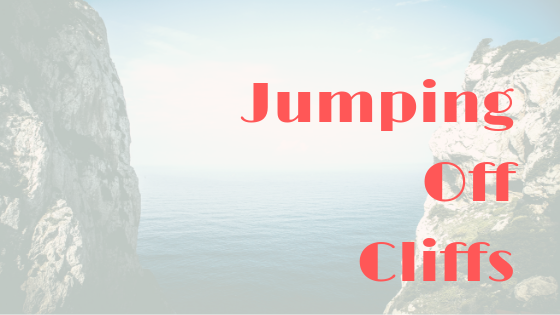 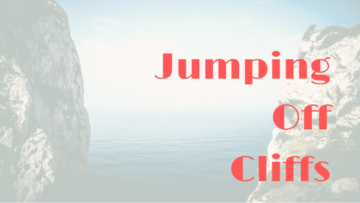 I once went cliff jumping with some friends in Eastern Washington into glacial river waters. It was years ago, so I’m sure the height of the jump has grown in my mind like a big fish story.

As I peered over the cliff down to the dark river pool, I felt the fear in my knees and throat. Thankfully, my BFF was with me and I had to steal some courage from her. Without much thought, I took her hand and we started running toward the cliff’s edge and leapt into the air!

I’m not an adrenaline junkie, but while standing on the cliff, I instinctively knew that if I contemplated this jump too long, I would chicken out. I definitely felt the fear.

The truth is, I didn’t overcome it. I simply jumped before my resistance could take hold.

Had I thought about it too long, resistance would have found me. I would have been caught up in analysis paralysis, trying to negotiate with fear.

It’s cliff jumping, so it’s supposed to be scary. And when you are doing some things scary, you feel fear. That’s what’s suppose to happen.

It’s not that different than when you find yourself trapped in procrastination, perfectionism or analysis paralysis. You’re in a state of overwhelm. And, underneath the feelings of overwhelm is fear.

The good news is, fear is perfectly normal when you’re doing something new or challenging. It’s the resistance to the fear that traps you. Instead of accepting the fear and jumping off the cliff, you end up standing on the edge looking down forever, trying hard to feel better about it.

Remember, when you’re putting yourself out there for a new challenge, it’s supposed to be scary.

The resistance will waste your time and energy.

Posted in Success Mindset
← The Runaway BrainWaking Up Overwhelmed →

View all posts by Chieko →

This website uses cookies to improve your experience while you navigate through the website. Out of these, the cookies that are categorized as necessary are stored on your browser as they are essential for the working of basic functionalities of the website. We also use third-party cookies that help us analyze and understand how you use this website. These cookies will be stored in your browser only with your consent. You also have the option to opt-out of these cookies. But opting out of some of these cookies may affect your browsing experience.
Necessary Always Enabled
Necessary cookies are absolutely essential for the website to function properly. This category only includes cookies that ensures basic functionalities and security features of the website. These cookies do not store any personal information.
Non-necessary
Any cookies that may not be particularly necessary for the website to function and is used specifically to collect user personal data via analytics, ads, other embedded contents are termed as non-necessary cookies. It is mandatory to procure user consent prior to running these cookies on your website.
SAVE & ACCEPT
Scroll To Top